My rat Trouble is dying and I feel like I can’t focus on anything.

The friendlier of my & Fox’s two rats, Schmoozer, struggled with respiratory symptoms for much of the time we had him. Sneezes and coughs developed into chirping noises and what I would call asthma attacks, until eventually it was a constant, fully audible effort for him to breathe. We tried treating him with antibiotics and an immune booster, but it wasn’t enough. And in the last weeks of his life, I was too caught up in struggling with severe depression to take him to the vet. The compassionate voices (both in and outside my head) keep saying that if I had gotten him to the vet in a more timely manner, all she could have done is prolong his life and therefore his suffering; there is no treatment that would have cured his disease. It doesn’t help to dwell I what I should have done or even what I wish I’d done, what would have been better or worse.

The reality is that we rushed him to the animal hospital at 2am last Sunday morning, fighting fatigue, depression, and one of the worst anxiety attacks I’ve ever had. As we passed a very serious car accident I thanked God that we hadn’t been in it and prayed for the people involved and their families. My anxiety got much, much worse. It took all my concentration to stay focused on the road, pay attention to driving, keep my mind from torturing me with crushing guilt and paralyzing catastrophic thoughts. I kept having this internal dialogue: “What’s my goal?” “To get my rat to the vet.” “Is this thought helping to achieve that goal?” “No.” “Then let it go. What will help?” “Focus on driving.” “Then do that.”

They took him almost immediately and worked all day to try and stabilize him. An incubator with extra oxygen. Three different antibiotics. A nebulizer like a human would use to treat asthma. Steroids to try and open his airways. Nothing worked. He kept trying to hide, he wouldn’t eat, he couldn’t sleep. All he could do was breathe.

They called us in time for us to visit with him. He perked up as soon as he saw us, and though the last thing he wanted was to be picked up he perched on my shoulder for a short time. We hugged and pet and talked to him; he got to taste a little bit of apple sauce. But it was clear that the most compassionate thing for us to do was to let our sweet furry companion go.

So it was with broken hearts that we agreed to euthanasia.

We brought the body home and spent Monday digging a hole in the back yard, so we could give our furry friend a proper burial. It was difficult physical labor, the perfect outlet for the anger that kept threatening to eat me alive in the form of guilt. 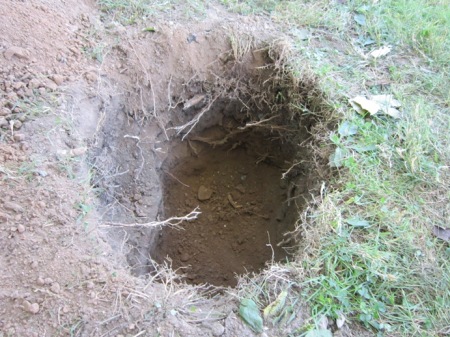 When we’d dug the hole as deep as we could get it, we had Schmoozer’s funeral. Simple reminiscence about what an awesome pet he was, some of our favorite memories of him, and wishes for him to be at peace. The ratty heaven we constructed for him sounds so wonderful, I wish I could visit. Plenty of treats, furry and large fur-less companions, lots of interesting places to explore and warm, soft places to sleep.

Then we placed him in the hole and piled the dirt we’d removed back in. I cried more freely – and loudly – than I ever have before. Fox was crying too. And as we stood there holding each other, looking at the large barren area where there had once been grass – and under which our beloved pet now lay – I began to hear a rustle in the trees. It grew louder, until every visible leaf was waving and a cool breeze flowed across our faces. When it had passed I said, “I think that was Schmoozer, promising to watch over us and make sure nobody steals our food. He’s at peace.”

The past week has not been easy. Most of my work with Wakana has revolved around freeing me from my overwhelming guilt. At our first meeting we talked about him; at our second we used a very large toning bowl that made the whole floor vibrate. Humming along with it helped me to feel whole in a way that I haven’t felt in so long … And after the last vibrations of its massive sound faded away, I started putting the things I’d loved about and learned from Schmoozer into it, each represented by a different colored scarf. Then Wakana asked if she could add something, and when I agreed she put in a white scarf, representing spirit. “For all these things to be integrated in you, and for him to be at peace.”

We’ve made some changes around the house over the past week. The first occurred Sunday night, as soon as we got home from the animal hospital: we moved our remaining rat, Trouble, from the big wooden cabinet-style cage we’d built into a smaller wire cage that had been their travel cage. According to the vet who tried to save Schmoozer, the wooden cage did not allow for enough air flow and that probably exacerbated the respiratory symptoms. The wire cage is a better size for a single rat and allows air to flow freely through 5 of its 6 sides – much better than the wooden cage, which only had ventilation on one side. Trouble has adapted the cage to his liking and seems quite content.

The second change has taken place over the course of the week and will be an ongoing process: Fox and I are both more committed to keeping our home clean. Schmoozer isn’t the only one who’s been suffering from the dust we’d allowed to build up; Fox and I have also been sneezing frequently and struggling to breathe through our noses. At times I worry that whatever is causing these symptoms may have moved to my lungs.

So on Monday we stocked up on cleaning supplies. I’ve already dusted a few times, with satisfying results. Yesterday we moved several items off the floor and into better homes; this made it possible for Fox to vacuum – and had the added benefit of making our home less cluttered. I’m determined to maintain this momentum toward a healthier home environment for myself, Fox, our current and future pet(s), and our someday children.

We’re also making more of an effort to spend plenty of quality time with Trouble, especially when he seems to be interested in socializing. Without a cage mate, we’re the only socialization he gets. In most situations it is better for rats to live in groups of at least 2 because they’re very social creatures who need to interact regularly with their own kind. But in this case the vet urged us not to acquire any additional rats until at least a few months after Trouble dies, to avoid spreading the disease. To be honest I think he’ll be happier living alone with plenty of attention from us, than if we allowed new rats to invade his territory.

I’m quite sure, and the vet confirmed, that Schmoozer suffered from a disease common in rats called mycoplasma. According to the Rat Health Guide, practically all pet rats are born with the bacteria mycoplasma pulmonis, which can cause the chronic disease murine mycoplasmosis. (The bacteria are not harmful to humans.)

Murine mycoplasmosis may have been present in Schmoozer before we even adopted him, but the symptoms developed so gradually we had no way of knowing. There’s no way to eliminate the bacteria, but it is possible to prevent symptoms (and the secondary infections that often contribute to murine mycoplasmosis) by providing a stress-free environment with minimal dust, good ventilation, frequent removal of urine & feces, safe bedding, and early treatment. We just weren’t able to do that well enough for Schmoozer to live a long life, but we did our best and I think we succeeded at providing him a happy one. He certainly brought us a lot of joy, and for that we will always be grateful.

You fool!
What is with you and that game?!
You play and play for hours on end
And every day is
Identical.

You think I am old and blind,
But I know:
You watch an image of a human
Play with her image of a pet
Images are all you see!

What about ME!?
I’m here!
Flesh and blood and FUR
And so much more
I need your love!

You’ve talked about walking
Walk with me!
I love to get out
Smell the world
And know you are right beside me.

But you sit and you stare and complain.
I know that you’re hurting
Your arm, every day
With that mouse.
Get out of the house!

They do the same thing every day,
And we repeat the same harmony.
I bark. You groan
And thrash like the dead
And shamble around reluctantly.

Blind
To the warmth of the sun on your face
A cool breeze to play
All these wonderful smells –
I could wallow in them all day.

I just need you.

You know how it feels
To be abandoned.