BREAKING: Obama Starts Having The Grownup Conversation About Guns That The NRA Doesn’t Want To Have.

It’s so good to see the president taking real action to strengthen gun control, reduce violence, and protect the rights of all Americans to life, liberty, and pursuit of happiness. I especially appreciate that he acknowledged people with mental illness are more likely to be victims of violence than perpetrators. It’s important for us to have powerful advocates. One of his measures is to improve access to mental health services, something people with mental illness desperately need.

But for the necessary changes to take place, everyone needs to act.

Please contact your senators and representative and urge them to support the changes President Obama has called for.

Today I read some articles that have me concerned about the potential impact of my last post (in which I described some of my own experience struggling with intense anger and the hoops I had to jump through to access mental health services).

And so we come to the real problem with mental illness: the stigma associated with it. That stigma can lead a person who is suffering to isolate hirself for fear of rejection, violence, and “being locked up” – instead seeking much-needed help. Not only does it put that person in danger, but it perpetuates domestic abuse and can create a significant risk for others in the community. It also costs a lot in terms of lost contributions that person could have made to society.

That stigma interferes the creation of an adequate mental health system. It interferes with people reaching out to someone who seems troubled or is exhibiting “abnormal” behavior and trying to get that person much-needed help. It criminalizes people who have mental illness.

Worst, it interferes with developing the understanding we really need in order to find more effective treatments and change society in ways that enable everyone to live safer and healthier lives. Most of the information available about various mental illnesses is from the perspective of people who have never experienced them. Descriptions of abnormal behavior, especially as it may be exhibited by people with schizophrenia and other psychotic disorders, verge on the sensationalist – like going to a freak show! Sometimes I read them and think, “if the author of this article saw some of the things I do on really bad days, what would ze think about me?”

Exposure to these portrayals likely silences the very people we need to hear from in order to actually understand the behaviors and bigger picture, particularly how they fit into and reflect upon society.  I most certainly do not want to be lumped in with the “monsters” and the “lunatics” and ridiculed (again – it was bad enough as a kid) and marginalized and worst of all considered unemployable  – just because I dared to share some of my experiences. I most certainly do no want to be physically brutalized or killed. So what am I supposed to do? Even writing this blog using a pen name seems incredibly risky.

So please understand this: whatever we may be feeling, whatever we may be tempted to do, even whatever we may do, people with mental illness are people first. Yes, it may be disturbing and frustrating to others who have to interact with us, but consider how much more disturbing and frustrating it is to us! We have to live with it constantly and with the terrifying and devastating consequences of behavior over which we sometimes feel we have no control. You are entitled to your emotions, but when you interact with us and talk about us and make policies concerning us, please do so as compassionately and with as much empathy as possible. And please respect our confidentiality – including that of children!

Please listen to people who are brave enough to share their experiences and insights as a person with mental illness – and if you are one of these people, speak out!

Finally, you can comment anonymously on this blog.
(All comments are moderated.)

I was very sad to learn of the massacre that occurred at Sandy Hook Elementary School in CT on Friday. It is devastating to think that someone could be so deeply troubled he could open fire on young children.

The debate regarding whether we should have stricter gun control laws has already come back to the forefront, despite people’s attempts to silence it. I hope that this time we will engage in the debate, at least long enough to try and prevent something like this from happening again.

Yes, people will be violent no matter how much you try to restrict their access to weapons. Yes, the 2nd Amendment of the U.S. Constitution protects the right to have and bear arms. But the bottom line is you can kill a lot more people a lot more quickly and with a lot less effort using an automatic or semi-automatic gun than with your bare hands, a knife, or even a gun that only shoots one bullet at a time. We need to make auto/semi-auto weapons and high-capacity clips inaccessible to civilians.

Beyond that, I’m inclined to agree with people who believe we should regulate guns at least as much as we regulate cars. Still make them accessible, but require some proof that owners will use them responsibly. (I know the shooter on Friday stole the weapon he used, but most mass shooters obtain their weapons legally.)

I’ve heard some other arguments that I believe are worth considering in discussions of how to prevent this kind of thing from happening again. One is that violence is glamorized in the media; this encourages or at least condones use of violence in real life. Another is that there is a significant connection between mental health problems and mass shootings, including the one that occurred on Friday.

As a person with serious mental illness, I’ve been struggling with a lot of very intense emotions – especially anger. As recently as December 3rd, I felt so overwhelmingly angry I wanted to feel the full force of my body being as destructive as possible, and I admitted that my desire to do so in a room full of breakable objects was a compromise with my respect for human life. Thank goodness I was with someone who could listen to me talk about these feelings and help me work through them! If that hadn’t been the case …

Well, I don’t have access to semi-automatic weapons. But I was driving a car.

This was a week after I’d made an appointment to see Psychiatrist B. In order to make this appointment, I kept having to call what I imagine must have been a bureaucratic call center and was told several times I’d be called back. They called back when I was in class or otherwise unavailable. When a human finally called and I was able to answer, she said that the subject I’m studying in school “isn’t depressing” – when, actually, it involves learning about some of the most painful experiences a person can have – and asked me extremely awkward questions, such as “what makes you cry?” Never ask a person with depression what makes zir cry. Answering that question requires one to think about things that make one cry, and that’s the last thing a person with depression needs. Ze probably does it way too often already!

After that conversation, I felt like committing suicide. A week later, I was arguably angry enough to commit homicide. Nine days later, I shut out the whole world – fortunately including my therapist, who expressed enough concern in her voice mail messages (which I chose to listen to, by the way) to break through my withdrawal and get me to reconnect with her. Fortunately, in my case reducing the anger was as simple as not taking a prescribed medication anymore. What if I’d needed something more complicated?

Finally, 15 days later, I met with Psychiatrist B. But before I could see him I had to hand someone my health insurance card, read several pages of literature, and sign many forms. I worried that the information I put on the form might cause the mental healthcare provider to deny me the help I so desperately needed. I had to disclose a lot of personal information: where I live, who I live with, my source of income, substance use history, criminal history, my religion, my age, my weight, my sex (there was no place to indicate gender identity), my sexual orientation, and so on.

Only after I’d filled out all the forms, and paid my copay, and signed my soul away, did I get to meet with Psychiatrist B. It was almost an hour after I had arrived. The appointment went well, but what if it hadn’t? The medication he prescribed probably won’t even take effect for another month, at least. I’m a resourceful person with health insurance who cares a lot about other people and knows how painful it is to lose a loved one too well to willingly inflict that upon another human being. And I have a good social support network, including an excellent therapist.

What about the people who don’t? 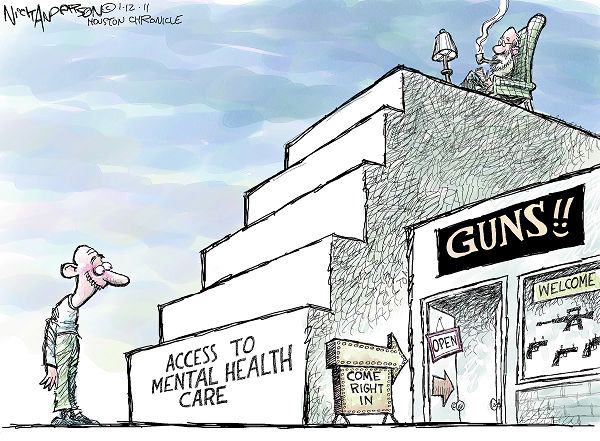 Twelve Facts about Guns and Mass Shootings in the U.S.

Mass Shootings: Maybe What We Need is a Better Mental Health Policy