from Classic Mandalas: 74 Designs from the World’s Traditions to Color and Meditate by Heike Owusu

A series of 4 images.

First, I used oil pastels to color in a spiral – or, as Fox put it, a rainbow snail shell.

I drew both spirals from the outside, in – but I colored the big spiral from the inside, out. My original intent was to go from the darkness within through the blood red to the light and growth without.

Then, I used darker colors to cover it up. By the time I was done smudging everything, my hands were almost completely black.

This is just one potential way to visualize depression.

I wanted to bring out some faces I saw in that mess, but drawing over it with oil pastels wasn’t working. If only there were a way to cut through the smudgy, messy depression and see something – anything – clearly!

I used a scratching tool to scratch off some of the oil pastel to create the image(s) you see here.

Finally, I was able to discover what was truly hiding behind that mess …

I have a wonderful book by Heike Owusu titled Classic Mandalas: 74 Designs from the World’s Traditions to Color & Meditate. Each odd page has a coloring-book-style mandala with a brief description, and at the back of the book there is a guide with information about what different colors can mean. In the past I’ve found coloring the mandalas to be very enjoyable and relaxing, so I decided to try one this evening.

The Web Mandala (p. 81) is made with lines radiating out from the center and intersected with other diagonal lines to create a variety of geometric patterns. As soon a I looked at the mandala, I saw a star radiating from the center outward with a square pillar descending from each corner of the image, almost like an outside force pushing in. It looks kind of like an alien invasion, actually, from the perspective of one of the ships.

I decided to color it to reflect what I saw, but as I was coloring I thought about how all the different individual shapes that I was assimilating into one could have been different colors, and if so what patterns might have emerged? Well, good thing I decided to make a copy of the image instead of coloring straight in the book! I can always try re-coloring this mandala in a different way.

For now, though, this is how I see it: 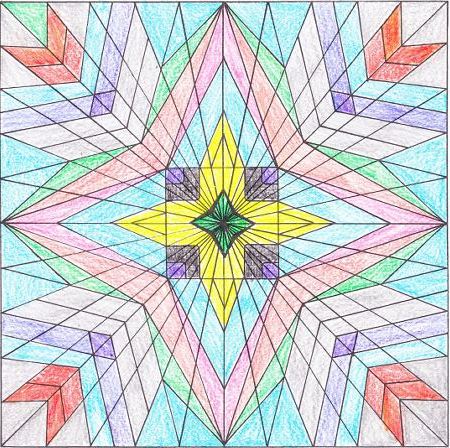 From the inside, out: the green represents life, hope, willpower, growth, well-being, and determination. The yellow represents joy, inspiration, intellect, imagination, and possibly fear of enclosure. It was the first color I chose; I tend to like to have yellow near the center of my mandala. The black represents revival, renewal, dignity, and being unconquerable. The very small amount of purple in the mandala – which is ironic because purple is the first color I was drawn to when I pulled out my crayons – is meditative and refers to individualism, spirituality, and magic. It can also mean sorrow and melancholy.

The blue that dominates the mandala refers to security, balance, calm, peace, freedom, limitlessness, idealism, and unselfishness. It can also refer to emptiness, boredom, and paralysis. The red and orange closer to the center of the image represent energy, ambition, joy, activity, courage, strength, and warmth; they are what drive growth (green). But the red and orange invading from the corners of the image represent hatred, impulsiveness, and rage.

Finally, it is notable that I used grey in this mandala because I hate grey. It makes me feel depressed. Coloring with the grey felt awful and I hate how much of the image it takes up. I’m going with the negative (or undesirable) interpretation of grey. It represents: destruction, lack of movement, fear, loss, threatening, loneliness, compulsiveness, and aversion. I colored beginning with the upper right corner and moved clockwise to the upper left corner, where I could not bear to make the entire area grey. The last thing I colored was the green triangle in the upper left corner, representing determination and recovery.

Maybe the grey pillars aren’t invading. Maybe the star burst is driving them away!

Right now it’s hard to tell. They’re both very prominent in the image. It’s like the battle could go either way.

While searching for informative links, I stumbled upon a PDF with mandalas to color in. That could be a good way to get started, for anyone who wants to give this a try!