I finally started training for the overnight! Here’s how things have been going: 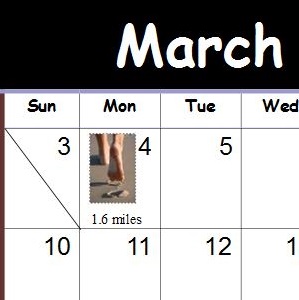 On Monday I made my first efforts to actually WALK. It was a beautiful day: sunny, with gorgeous blue skies, not terribly cold, but a bit windy. Fox and I walked about 0.8 miles from his home and then came back the way we came, for a total of approximately 1.6 miles – a 10th of what I need to be able to do in 85 days.

I would have been able to go farther if it hadn’t been for time constraints and the difficulties I had when we were going uphill for the second half of our walk. The exertion caused me to breathe more heavily – that was fine, I would have been surprised if that hadn’t been the case. My nose was stuffed and I had no way to clear it, so I was forced to breathe through my mouth and cope with post-nasal drip. The resulting discomfort hampered my enjoyment of the walk; I learned that I should always carry tissues. A decongestant might not hurt, either.

On Tuesday I walked 2.8 miles in a loop near my house, despite being rather tired. I had to push myself, my muscles and joints hurt, and I got a blister on my heel. I was struck by how far a mile is when one has to walk it, especially if one is in pain. However, I think I found a relatively healthy balance between pushing myself to complete the walk and knowing my limits; I took breaks as necessary.

I took off from walking on Wednesday and Thursday. My plan on Wednesday was to give my blister time to heal. On Thursday I thought I would walk – but the weather was gross, so my only walking was the trek across campus.

Week 1 of training for the Out of the Darkness Overnight

On Friday I decided to do some strength training with my fitness ball. It comes with a workout guide including instructions and illustrations for:

I am a beginner, so (per the instructions) I did 12 reps of each of the exercises above that are in bold. I tried, but was unable to do, the Hover. Balancing on a giant ball is hard.

On Wednesday I met with Psychiatrist B for another 2-month follow-up. I told him about the increased depressive symptoms I’ve been having and the situational factors involved. He gave me relatively useless advice on what to do about my relationship with my mother and told me I have to take responsibility for my schoolwork (instead of, say, smashing the clock). I couldn’t get up the nerve to mention my recent suicidal thoughts or the freezing Wakana had helped me label (Using Words to Say What They Cannot). On a rational level I knew if I was going to talk to anyone about those symptoms it should be my psychiatrist, but on an emotional level I just didn’t feel safe doing so.

Psychiatrist B decided to stay with the Zoloft at my current dose (50mg 1x/day) and add another medication that’s used to treat anxiety. I don’t remember how he pronounced it and I can’t read his handwriting, but I was able to make out the first few letters. When I typed them into the search bar on drugs.com, it recommended BuSpar.

Based on the information on the website, my only concern is the risk of interaction between the two drugs, which can result in the serotonin syndrome I believe I experienced near the end of October (Finding the Right Medication – Part 2). At that point in time, miscommunication resulted in an overdose; this time I have very clear instructions on how much of each medication to take, and when. He’s keeping me on a low dose of the Zoloft and having me start on a low dose of the BuSpar, increasing it gradually over the course of 5 days.

The thing is, I have no idea what’s going to happen. Based on user reviews, the effects of the drug seem to vary pretty widely from person to person. It could work great with minimal side effects, or it could make me so dizzy I can’t read for school. And worse.

I’ve spent an inordinate amount of time playing The Sims 3 over the past couple days. I played until the children from Ending a Life grew up into teenagers, then decided I wanted to have family portraits that included the patriarch and recently-deceased matriarch. So, I created a new game and restarted playing this family from scratch – only to have the game barf on itself when I tried bringing my intended photographer to Egypt so she could learn her craft. (World Adventures expansion: visiting Egypt is the only way to acquire a camera and learn photography.) After several repeated attempt I concluded that the save file was corrupted. I had to restart my game again; this time I sent her to Egypt first and everything went smoothly – in the game, that is.

I, the embodied Ziya, have been eating crap, depriving myself of sleep, neglecting my schoolwork and other responsibilities, ignoring the pain in my wrist and shoulders from sitting in a weird position for hours on end, and allowing my space to become (more) cluttered! I’ve put off filling the prescription for the past two days, denying myself a medication that could (perhaps, if I wiggle my toes the right way) actually be helpful!